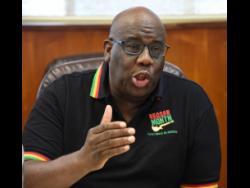 What is reggae? – Musical form, lifestyle or all of the above? | Entertainment

In anticipation of the 13th edition of Reggae Month, industry professionals, executives and advisors gathered for The Gleaner’s Entertainment Forum to determine the importance of devoting an entire month to reggae. The panel included Entertainment Director Maxine Stowe, Howard ‘Big Mac’ McIntosh, Jamaica Reggae Industry Association (JaRIA) President Ewan Simpson, Sound System Owner and Operator DJ Squeeze and Entertainment Advisory Board Member Lenford Salmon . And within this circle of thoughtful and passionate lawyers, the conversation could only begin after having first attempted to tackle a question usually left to musicologists.

â€œWhat is reggae? McIntosh asked, repeating the question Reverend Al Miller asked at Reggae Month‘s church service last year. Since that service, McIntosh has taken every opportunity during his travels to ask international observers what their response is. In response, some people have said that reggae is a representation of life. â€œFor them, it’s more than a form of music. I ask some people in the Caribbean, and they say it’s the first kind of music they’ve been exposed to. So sometimes we don’t understand what reggae means to the world. I want to suggest that we need to define it, â€he said.

JaRIA’s president added his two cents, saying local attitudes have long treated entertainment as extra-curricular and therefore failed to define its musical spawn which has had a global impact. â€œWe took it for granted, and it was always treated as a hobby. This is true for sports, music and the creative industries. I think we’ve realized now that it’s really an industry, a business. We have to make sure we own it, define it and benefit from it as we need it, â€said Simpson.

Based on the panelists’ attempts, defining reggae would require combining the local perception, that reggae is its own distinct genre with particular sound elements, and the international perception, that reggae relates to all popular music and signifiers. cultural associations. â€œParticularly in the academic narrative, we make that kind of distinction when we say that Jamaica has given the world seven genres of music. However, we are probably fighting against the winds of change, â€said Salmon.

With the group coming up with examples like dancehall artists Sean Paul and Shabba Ranks celebrated as Grammy recipients for Best Reggae Album, it was suggested that the world had already defined reggae for us.

Simpson said, â€œEven in the context of musicology, because reggae as a genre of music has become so dominant, it has become synonymous with all major popular music in Jamaica. It’s normal for things to change. Everything else, be it roots rock, dancehall, dub, or any of them, are now subgenres of reggae. There is no economic value in closing it. As it stands, why are we going for a gift horse in the face? The world named it for us and covered it. Take it.

As pleasant as the majority is, there was no consensus among the panelists. Stowe offered an alternative point of view: to claim to found and popularize several genres of music, they must be distinct.

So Salmon continued, â€œFreddie [McGregor] started in the rocksteady era, but no one knows Freddie as a rocksteady artist. They know him as a reggae artist. The world accepted them as reggae. So we use reggae generically to enjoy it.