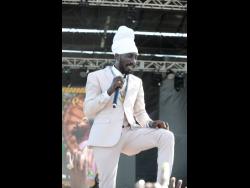 Recording artist Sizzla Kalonji was named 2019 Culture Icon at the International Reggae and World Music Awards (IRAWMA). It was an award well deserved by the artist, said Ephraim Martin, CEO of Martin’s International, the producers of the annual awards that highlight those in the music industry.

While not one of the winners who took part in the live ceremony which was broadcast on TV and social media last Saturday, he said he felt good to be a part of something of his caliber.

“It’s a great time in reggae music to know that I’m chosen from among all the great people before me who have worked to liberate and educate the nation; it’s a wonderful feeling,” said Sizzla. THE STAR. “This is a nation that has suffered at the hands of Babylon for so long but has now seen the light of Africa and Rastafarian, so I am truly touched by this. Our reggae music is a blessing for the poor and a right preserved. “

Although the culture icon is a special award that did not require a public vote, he said it still acts as a token of acceptance and appreciation by the people.

“For all the hard work done in painful days by genuine creators who act as the roots of such appealing music, that this great blessing and distinction be granted to me … I will pay homage to Most High Jah Rastafari , and also those of us here today, the fans and lovers of reggae. I dedicate it to people all over the world for a job well done, “said Sizzla.

The Solid as a rock The artist says music has been a true blessing in his life, and the same for people around the world, and it reminds him to be grateful to all those who leave a permanent mark on him and his musical journey.

He promised to represent as an artist who promotes culture by teaching young people its value.