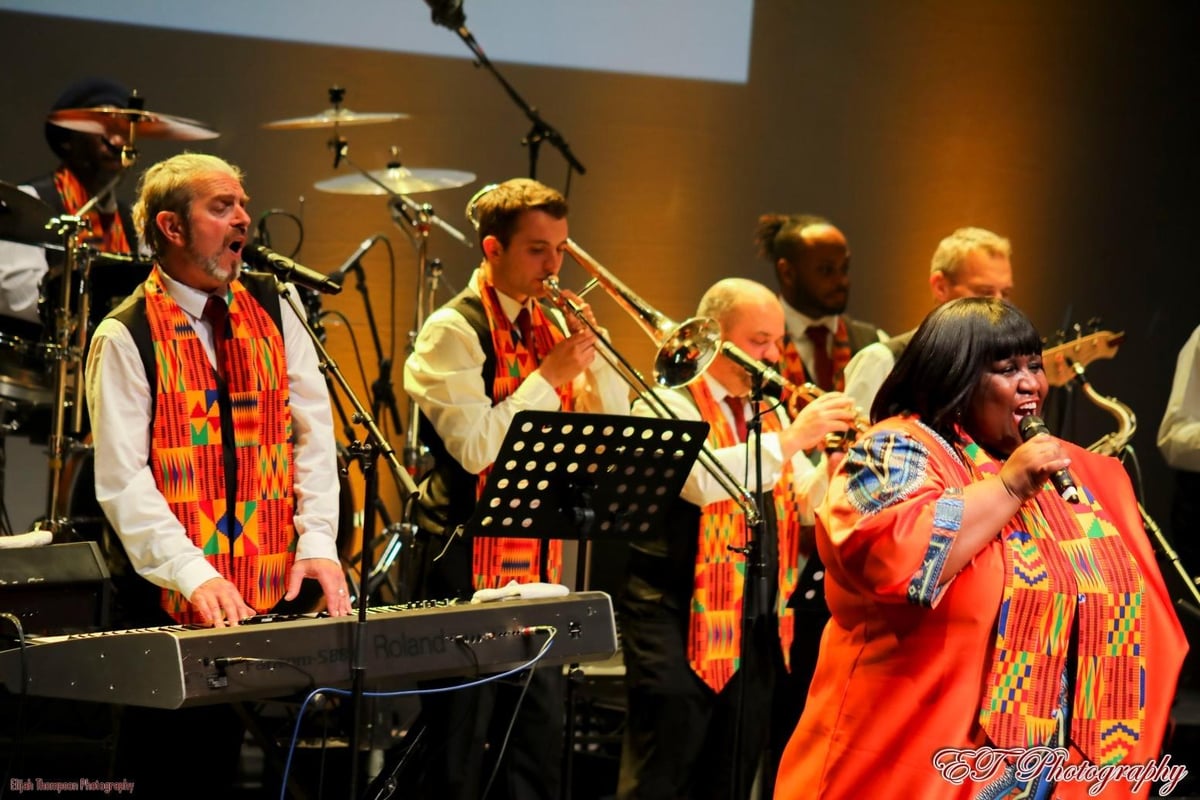 Our narrator, John, began in the 1400s and continued through Jamaican history to the present day. Accompanied by the JA Reggae Band and two incredibly talented singers, there was music to accompany the explanation of the journey through each era.

The show started with two Jamaican stragglers running towards the stage, one white and one black. John joked, “You have white Jamaicans, you know!”. As he kept reminding us, there is no white history or black history, there is only history and it belongs to all of us.

Sadly that five second sprint was the only acting that would be seen for the rest of the show but with a few real stragglers surfacing amongst the audience it was hilarious to see them given a personal welcome and there was plenty more of interaction with the public to come. .

Appreciation was shown for the men and women who contributed to Jamaican culture. There was a significant age range in the crowd, with John giving warnings to ‘go your own pace’ and not run out of dance energy too quickly. With such a large audience, he also took the liberty of explaining the correct ways to pronounce words in Patois rather than Queen’s English.

There was an abundance of musical talent on stage with Janice Williamson and Daniel Bowen-Smith demonstrating powerful vocals and adding twists to songs that always received warm applause and woops from the audience. The show gave each musician the opportunity to show their individual talent, and not just as a member of the ensemble.

Wayne Scott on drums initially set the tone for the show and there was another memorable guitar solo from Orvil Pinnock. It was great to see the band as a focal point of the whole performance rather than just an optional accompaniment as they walked across the stage and were all introduced by name. However, DJ Ken Mclean really stole the show as he returned after the interval in a bright pink suit and bright sneakers to go with his dreadlocks on the floor. Ken remained energized throughout the performance, pushing the energy levels even higher with his time-traveling mixes.

Prior to seeing this performance, there were limited parts of Jamaican history that I would have described as “joyful”. From the days of slavery and invasions from other countries to more recent false promises made to the Windrush generation. “On many people,” repeated narrator John.

I left the show realizing that joy doesn’t come from the unfair things that have happened in Jamaica’s history; but that history is what has shaped people as they are today. Joy comes from people, their attitudes and their resilience.

Rush: A Joyous Jamaican Journey is another great example of innovative performance art that is becoming more and more commonplace in modern theaters. You might not see the words “story” and “party” associated with each other very often, but those two words are the only way to sum up the performance. They did things a little differently. Even the merchandise store lacked the usual tacky souvenirs, opting instead for handmade jewelry that would make great gifts or treats.

This show at the Lyceum really encompassed Jamaica’s welcoming and fun culture. If you are looking for traditional theatre, this is not the show for you. However, if you’re open to the good vibes and learn a thing or two along the way, Rush is a great experience for the whole family.

Picture This column: “The ska and reggae music scenes in Southend are booming”