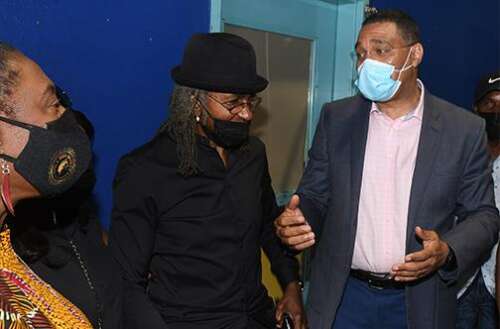 Reggae music won’t be the same without Robbie Shakespeare – Grange

Prime Minister Andrew Holness (right) talks to drummer Sly Dunbar, one half of the rhythm duo Sly and Robbie, as Entertainment and Culture Minister Olivia ‘Babsy’ Grange looks on. The occasion was a public screening for the late bassist Robbie Shakespeare at the National Indoor Sports Center in Kingston on Sunday. (Photos: Karl Mclarty)

KINGSTON, Jamaica — Culture, Gender, Entertainment and Sport Minister Olivia Grange says without Robbie Shakespeare, the world of Reggae music would not be the same.

Grange offered the remembrance at the Thanksgiving service held at Webster Memorial United Church on Monday for the life of the man considered the 17th best bass player in the world.

In a statement, Grange said fans and musicians at home and abroad would miss that Robbie Shakespeare’s bass “produced those warm melodic lines to wow them, sway them and sway them.”

“Rest assured, however, Robbie leaves behind a legacy of cultural richness, musical inventiveness and human generosity that will live on forever. others, who for various reasons keep in touch with me,” she said.

“However, few artists and musicians have been as caring as my dear friend, Robbie Shakespeare. and Power”, until the day of his transition. So he is always in my heart and always will be.

Grange shared that over the years she has witnessed Shakespeare’s growth both as a musician and as an individual.

“We all know how respected Robbie was as a bassist and producer internationally, but not only did the quality of his musicianship place him in that esteemed echelon; as a Jamaican, he also carried the nation’s flag high due to his respectable conduct and attractive personality,” she said. “As his wife Cat said, ‘Robbie was a loving husband, great breadwinner, devoted family man and, to many, an incredibly stable friend.'”

“Robbie has made a significant contribution to our national identity. But he wasn’t born into circumstances where that was the standard expectation; he acquired these significant qualities because he focused on his musical development and personal growth, which inspired many contemporary musicians,” Grange continued. “Robbie has had his ups and downs in life, but for me Robbie will always be a model representation of our country and the best qualities of our people; and it will remain a credit to our nation. That’s why, as a Guardian of Culture and in my capacity as Minister of Culture, I have always considered Robbie Shakespeare to be a true ambassador for Jamaica, musically and otherwise.