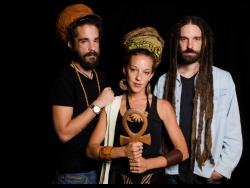 Since their formation in Madrid, Spain several years ago, the Emeterians, a reggae trio, have consistently delivered reggae albums with electrifying verve combined with a soulful mix of lyrical, soulful and uplifting roots reggae hymns. .

The Emeterians include Maga Lion, Brother Wildman, and Sister Maryjane. They believe that now, more than ever, the world needs the powerful voice of reggae music to tackle the inequalities that have been exacerbated by the COVID-19 pandemic.

“We believe that reggae music is and always has been music that conveys a message of righteousness, socially committed to fight against injustice and preserve the principles of equality. We firmly believe that this message is timeless and that it will continue to encourage and guide humanity to finally achieve a better future, ”said Maga Lion.

The Emeterians have always shown their appreciation for various types of reggae on tracks such as the splendid Love is the king and roots-rock, horn-happy Positivity = Possibility. Their latest album, Roots O’Clock, was released by VPAL Music in 2019 and they were due to release an acoustic album last year. However, the pandemic forced them to postpone the release.

“Like most artists, all of our shows have been canceled. We were having our best year so far 2019, so we had already booked festivals and are planning to finally travel to Jamaica and the US in 2020. We also wanted to release an acoustic live album in April. But the pademia also affected us in a positive way in the sense that we were able to work on new recordings. We also had the chance to work on several covers with Brian Travers from UB40, a new album, the containment project“said Maga Lion.

The group is now promoting the single, World crisis, which was produced by Frankie Music and which is distributed by VPAL Music.

“We were also part of a great project called Female reggae voices with many talented Empresses from all over the world. The truth is, the pandemic is teaching us how important music is to everyone and how simple things matter. We believe the industry needs to readjust, just like us artists and musicians need to readjust again when the concerts return, ”said Sister Maryjane.

The Emeritans say they relied heavily on social media to maintain a relationship with fans.

“We have learned a lot about how to make your social networks more engaging by creating many different formats and being able to deliver interesting content to our fans on a regular basis. Regarding Instagram Live sessions, we try to do at least one per month. However, since the three of us don’t live, sometimes that’s not possible because of the confinement, ”Elder Wildman said.

They’ve been to several streaming festivals and online fundraisers and are looking for new ways to stay in touch with their music family.

Emeterians freed Unit power, their first album, four years after their formation in 2004. In 2015, they released their second album, Inna Different Style, which was followed by The trip in 2016, and Roots O’Clock in 2019.

The Emeterians have graced the stage at several major festivals, including the Rototom Sunsplash in Benicassim, Spain, as well as major shows in the Balearic Islands, Portugal, Germany and London.