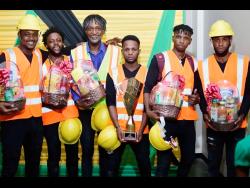 The Dynamix team is the 2019 World Reggae Dance Champion of the Jamaica Cultural Development Commission (JCDC). The six-member team, which won the competition in 2016, turned down the competition of 10 other dance teams last Friday night, including an all-female team from Belgium. The National Arena came to life as Jamaican dance culture took center stage in the island’s first international dancehall and reggae competition.

The team of Hodeano Dixon, Nick Thorpe, Ryan Beckford, Travis Thompson, John Allison and Oshane Mitchell, clearly public favorites from the start of the competition, practically sealed their first place with a perfect and energetic routine. Dressed in head-to-toe construction clothing, the crew told the story of a group of hard-working men, doing whatever it takes to improve themselves. With every prop, every song selection and every choreographed movement, the audience was sold on the plot. They received the first and only standing ovation of the evening, and so, when it was announced that they would walk away with the title, there was no argument, just loud cheers of approval.

Talk with The gleaner after the announcement, the dancers, overwhelmed with emotion, said they were deliberate in the story they chose to tell through their routine. Stressing that dancing is generally seen as a hobby rather than a career, the group, which has performed together for over a decade, said they wanted to show that “dancing is hard work and a legitimate profession.”

Team member Oshane Mitchell said, â€œPeople don’t recognize what we do as a job, they see it as a hobby, something you do for fun. But we wanted to show that while it’s fun and we love it, it also takes hard work, sacrifice, and real dedication, just like any other profession. “

He added: “We had the idea that we would be the winners tonight because we take it very seriously and we did our best, and it was obviously pretty good.”

His teammates shared similar feelings. â€œWhat we do requires a lot of sacrifice. We are not just dancers but dance teachers and we need to devote time to practice every day. For us, dancing is a job, it’s a priority, â€said Ryan Beckford. â€œSome people see this as something that won’t pay you and support you in a meaningful way, but they’re wrong. People have to stop watching dance at this basic level because so many people are going around the world of dance and they are doing well in life. We must finally get the level of respect we deserve.

In addition to the league title, the Dynamix team walked away with over a million dollars in cash and prizes. The Afro Jam Tribe and New Era team walked away with second and third places, and $ 300,000 and $ 150,000 in cash prizes, respectively. The reggae dance world championship was first held in 2006.