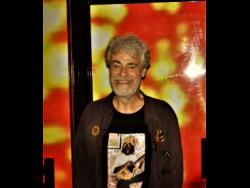 (This is the first part of the FAUM series – Five Astonishing and Unforgettable Moments – which explores aspects of reggae, dancehall and soca music through the lens of performers, promoters, producers and other professionals).

By any measure, Roger Steffens is easily one of the most authoritative voices alive in reggae music today. Steffens is a Brooklyn-born California resident who has been passionate about the genre for over four decades.

His first trip to Jamaica was in June 1976 to see Big Yute perform, and his most recent trip was a few weeks for the opening of the Peter Tosh Museum in Kingston. Steffens was on the Bob Marley Survival Tour in 1979, and over the years Steffens has become something of a walking encyclopedia of reggae music, authoring six books on the genre, along with two others, The Acid Jamaica family (Rock House) and the Oral History of Bob Marley (WW Norton) on the way next year.

He also brought clarity and worldwide exposure to the captivating Jamaican rhythm through several pioneering radio broadcasts as well as contributions to Time Magazine, The New Yorker, BBC World News, The New York Sunday Times and The Guardian ( UK).

I recently met Steffens in Kingston. Much like famed Jamaican tour manager Copeland Forbes, Steffens immediately engages with a vast body of reggae knowledge at his fingertips. But I still wanted to test it to see if it’s just really good or surprisingly brilliant. So I challenged him to contextualize a random unpublished black and white photograph of Jimmy Cliff, Peter Tosh and Rita Marley from the early 1980s. Without batting an eyelid, he told me, correctly, that the photography

was from a New York City Plaza Hotel press conference in 1982 announcing the World Music Festival to be held in Montego Bay later that year. So yes, the man is surprisingly brilliant, and the fact that he has seven rooms laden with reggae memorabilia in his California home doesn’t hurt his reputation one bit. And since he has witnessed the growth and development of reggae for so many years, I then asked him to identify five of his most amazing, breathtaking and defining moments for reggae. Here is what he had to say:

1. The 1972 release of the classic film The more they come. Perry Henzell’s beautiful and unwavering look at the Jamaican political scene through the lens of the music industry has won over audiences around the world in 43 different countries. Henzell rented theaters with his own money to bring reggae music to the outside world. It starred in Boston for eight years in Harvard Square, one of the first “midnight movies” to achieve classic status. Jimmy Cliff, when playing in Boston, was known to jump in front of the screen at the Brattle Street Cinema when the scene occurred showing him posing with his six pistols in the photographer’s studio, causing a ruckus in the Brattle. Mention should also be made of the film’s soundtrack which continually sells out and is never out of print and has become Jamaica’s best anthology.

2. The Bob Marley Shoot and Smile Jamaica Concert, December 3-5, 1976. The Smile Jamaica events marked the precise moment Bob Marley transformed from showman to shaman, surviving a bullet that grazed his heart, occurring two nights later in what I consider to be the most extraordinary moment in the history of 20th century popular music. Bob was shot at his Hope Road residence. He was in hiding and was pressured by almost everyone not to play the concert, which was to take place on Sunday, December 5, 1976, at the National Heroes Park, in the open air, in full view of tens of thousands of people. “The armed men will come back and complete their task,” he was told. In the end, however, he decided to make a brief appearance, arriving in the dark before a crowd of around 80,000. He continued to put on a thrilling performance for almost an hour and a half. His wife was by his side, dressed in a hospital gown with a headdress bandaged over a bullet lodged in her skull. Bob carried a bullet in his arm and took it to his grave. The place was overflowing with dignitaries and ordinary Jamaicans determined to protect Bob with their own bodies. Bob lifted his sleeve to show where the bullet was and then he opened his denim jacket to reveal where the other shot had grazed him. He wrapped his hands in guns, went “bang, bang”, then, twirling his thumbs up as if to say, “But I’m fine”, he disappeared from the scene and went into exile for almost 15 months since Jamaica, becoming a forever changed man after these events. There is nothing like it in the history of pop music.

3. SUNSPLASH I, 1978. Sunsplash, the largest and most influential of all Jamaican music festivals, was born in 1978, conceived by an enterprising group of people concerned with providing a forum for visitors to see the best of artists Jamaicans. The first staging lasted 10 days, with beach parties, disco nights and jazz alongside some of the most interesting artists in roots reggae. The first generation of talent included Dennis Brown, Toots, Beres Hammond, Jacob Miller, The Heptones, Jimmy Cliff and Monty Alexander. It was held in Montego Bay in June, at a time when hotels were experiencing extremely low occupancy rates. In 1979 a shorter version took place with huge crowds coming to see Bob Marley headlining. The following year, some 800 people were killed in the run-up to general elections. A one-night-only version was therefore organized to continue the tradition at the Ranny Williams Center in Kingston. Marley’s death in 1981 led to a re-staging in Montego Bay at Jarrett Park where visitors from around the world flocked to pay their respects to the king of reggae. Reggae fans began to recognize Sunsplash as the annual international gathering of fans, and Sunsplash spawned magazines, radio and television shows, films, record labels, assorted merchandise, and tours that used all the magic name. Lasting friendships were made at Sunsplash and its influence was powerful around the world.

4. Yellowman in San Francisco condemning homosexuals in 1982. A major turning point in music followed immediately after Marley’s death – the triumph of looseness over Rasta-inspired roots – with the rise of salacious rapper Yellowman. In his first appearance in San Francisco, long considered the gay capital of America, Yellow launched an anti-gay rant against gays and lesbians, encouraging his audience to track them down and beat them up. The city was so outraged that the San Francisco Chronicle wrote an op-ed condemning the performer for inciting violence and, in doing so, making reggae music an instrument of hate. Echoes of this event had long reverberations as other Jamaican rappers joined him in producing what was called ‘hate music’, leading to canceled engagements as gay organizations fought to ban the performances of many of these artists while traveling abroad. The music has never been the same since, and many radical acts have felt unfairly sullied by the “anti-gay” label, losing gigs and millions of dollars in the process.

5. Reggae Goes Grammy, 1985. Reggae music’s fight for international acceptance took a big leap forward when, after years of petitioning, the American National Academy of Recording Arts and Sciences (NARAS ) finally created a specific category to award a Grammy for reggae. I was chosen to be its founding president and held that position for the next 27 years. Black Uhuru won the top prize, followed three years later by the posthumous Peter Tosh award for his latest album, No nuclear war. Since then, a disproportionate number of annual trophies have been won by Bunny Wailer and members of the Marley family, so much so that many people have accused me of personally choosing the winners. (In fact, I never cast a single vote in all these years, in order to maintain my neutrality). I was once verbally abused by Eek-A-Mouse who claimed I only gave it to those “white Marley boys – and I’m too black” which led me to respond that if Mouse really wanted to win a Grammy, I would tell him the secret, and if he did what I told him to do, he would win the Grammy for his next album. “What?” he growled. “Change your name,” I said, “to Eek-A-Marley.”